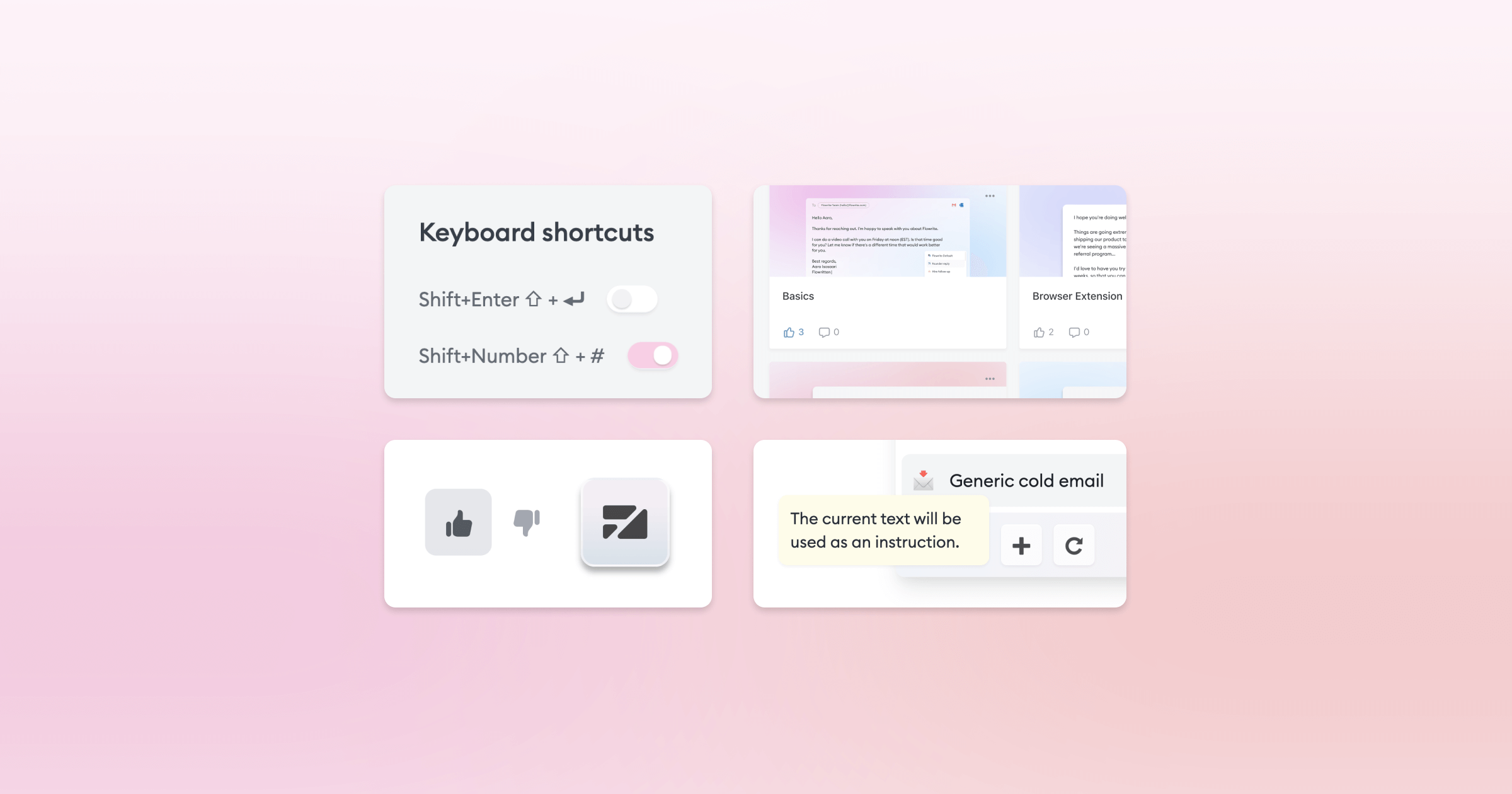 The past two weeks have been special for the product team at Flowrite: The team has grow from 2 to 5 members, and we have incorporated many new ideas into our mix.

Shortcuts feel pleasant when they are customized to your personal flow. That said, we are still figuring out the most favored key combinations when it comes to using Flowrite. Because of this, we included a way to toggle the preset shortcuts on and off.

We also improved the way you can call shortcuts. From now on, they'll work from within the text input area or from outside of it - no longer needed to unfocus from your editing process only to trigger them.

It used to be way too easy to accidentally use the previous output as an input to Flowrite. This would result in outputs that would look identical to each other.

We added a tooltip to prewarn you before stumbling into any unwelcome surprises.

Users can choose the tone of their texts by pre-selecting from a set of common types of tones in writing. Previously, you could select 10 different options at once if you wanted to.

We tweaked the setting to allow selection of maximum of 3 tones at one go.

It was common for users to forget to save changes to user settings, and we could have done a better job in reminding them of that.

We implemented a more visible Save button that pops up when there are changes to be saved.

Smaller fixes included checking template fields for unnecessary characters or new lines, as well as reminding users to include the recipient field when using the web app.

We've implemented a way for users to give feedback on their completions with thumbs up/down buttons.

We are going into great detail in analyzing the odd cases, and the feedback on those stellar completions will help us guide our way towards bringing users a solid product tailored to their style.

We solved a conspicuously trivial-looking bug that actually had been driving us nuts in the front-end - getting a custom font to work in the extension. How hard could it be? Finally, the more beautiful font is there for the users to enjoy, instead of the fallback one.

Previously, would dismiss your preset signature in Gmail and just go about replacing it completely with its own output. No longer, Flowrite is now able to output without interfering with the signature you've set through Gmail itself.

We created a four-part Product Tour to guide users through the initial steps of using Flowrite.

By giving it a quick read, users can skip a lot of the initial friction and get into results quicker.