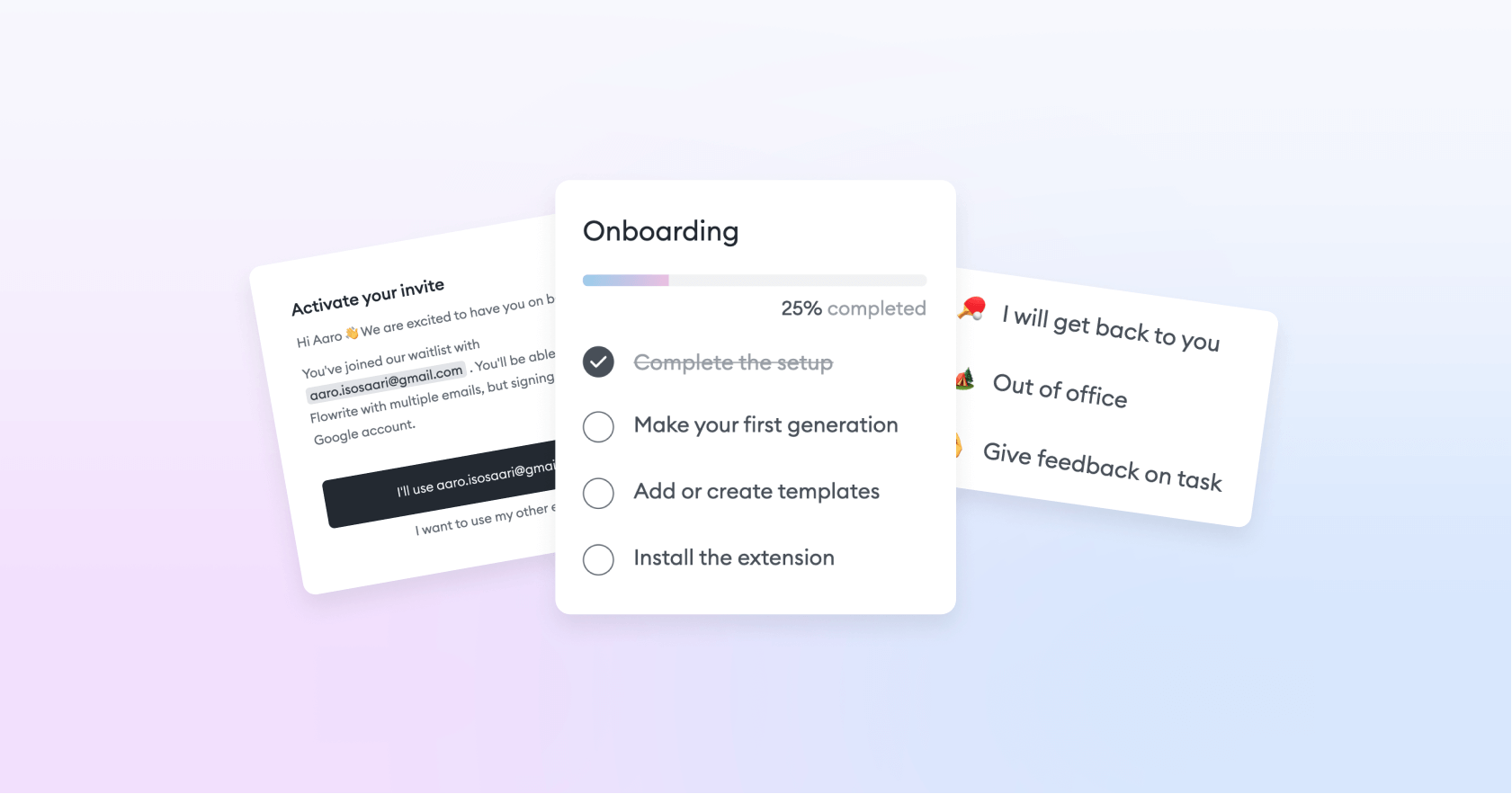 🔮
While preparing for some more exciting AI updates to be released in the coming weeks, we focused on improving the new user experience and reliability of our beta product.

After implementing our self-serve onboarding flow (Product Update 7/2021), we've continued streamlining our invite process to gradually onboard 20,000+ people from our waitlist.

Since we are still in beta, signing up at app.flowrite.com is not possible unless we've added you on our allowlist, a process that we used to do manually until this month.

Now, users are given a unique URL to our signup page where they activate their beta invite. Users also have a chance to use a different email than what they signed up to the waitlist with.

In the background, we look up our database to make sure that the URL is eligible for access, and add the chosen email to the allowlist.

We analyzed some of the feedback from our recent onboardings and implemented several improvements to the flow:

We designed and implemented a beautiful checklist to the sidebar to guide the user through the first actions after finishing the initial setup.

One of the goals with of our onboarding is to get users to adopt our browser extension – the primary way of using Flowrite for daily communication.

In addition to having it as part of the checklist, we now display a pop-up with a quick tutorial to helps users use the extension after installing it from the Chrome Web Store.

New templates in the collection

We analyzed some of the templates created by our beta users, did some testing on them, and added the best ones to our template collection:

This month, we moved away from a one-size-fits-all email activation flow, which used to bombard users with tips and tricks without considering where they were in their user journey.

From now on, new users are welcomed with smart event-based emails that teach them to write better emails faster at their own pace.

In addition to educating the user and helping them forward whenever there's a bump on the road, we focused especially on enabling them to build a habit of flowriting. To do that, we enlisted the help of our early users to share their best practices for making Flowrite a part of users' daily workflow.

🔥
We are also proud to share that earlier this month, Flowrite was selected by Wired as one of the hottest startup in Europe in 2021. This has been an amazing boost for our launch plans and a testament to the hard work of the team.