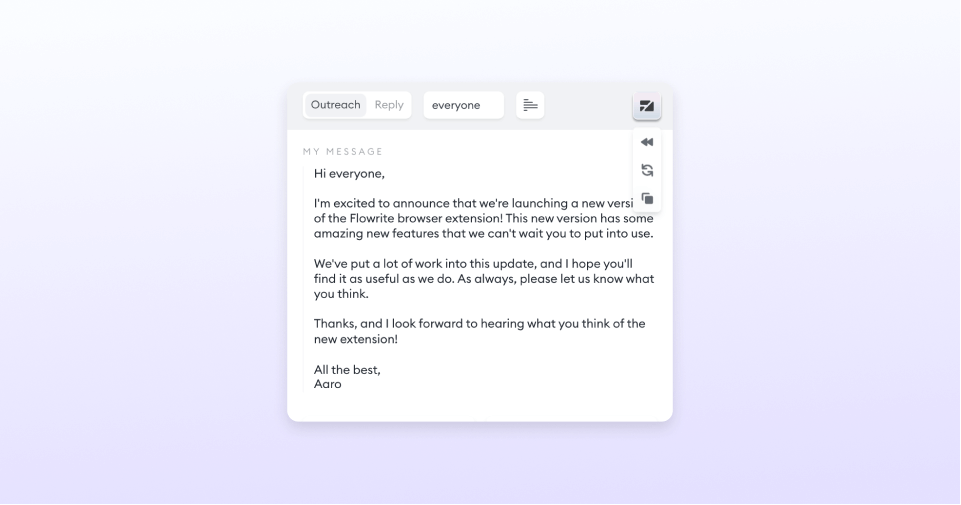 ☄️
After a month-long break from updates in December, we are back with a bang. Here’s to our biggest product update yet!

We started the new year with a significant update to our core product; a new and better Flowrite browser extension. In addition to our existing integration with Gmail, the new extension now works across Google Chrome on popular communication platforms such as Twitter, LinkedIn, and Intercom, as well as email providers like Outlook and Superhuman.

In our existing “deep” integration with Gmail, Flowrite still automatically picks up the latest email in the thread, whereas with newer integrations like LinkedIn and Outlook, users select those inputs manually. We are looking to further expand our portfolio of deep integrations to make the flowriting experience across the web even faster.

Sometimes, it might take a couple of regenerations to get exactly what you’re looking for from Flowrite. To increase the chance of getting a desirable output on the first try, we now give you two additional alternatives on both the extension and web app.

The multigeneration feature will reduce the time you need to spend on flowriting, and thus, the time you spend on communicating in writing overall.

Earlier in January, we implemented major changes to how templates are accessed, edited, and communicated to our users. Most importantly, we brought all collection templates to the Flowrite button, making them accessible also in the extension, and made it possible to shuffle templates right within the Flowrite button.

The end of 2021 called for a redesign to our landing page. Flowrite.com now acts as an introduction to the most important workflows of our product and communicates our value proposition, vision, and features better than before.

However, we didn’t stop there – we created a whole set of new pages for product features and use cases for professionals working across company functions. Check them out!

At the end of last year, we announced a $4.4 million seed round led by Project A and joined by Moonfire Ventures, new angel investors, and our existing investors Lifeline Ventures and Seedcamp.

The new funding presents us with incredible resources to continue building a world-class product and realize our mission of helping the world communicate in writing. You’ve witnessed the first outcomes of this acceleration in this update – and there’s so much more we can’t wait to show you.